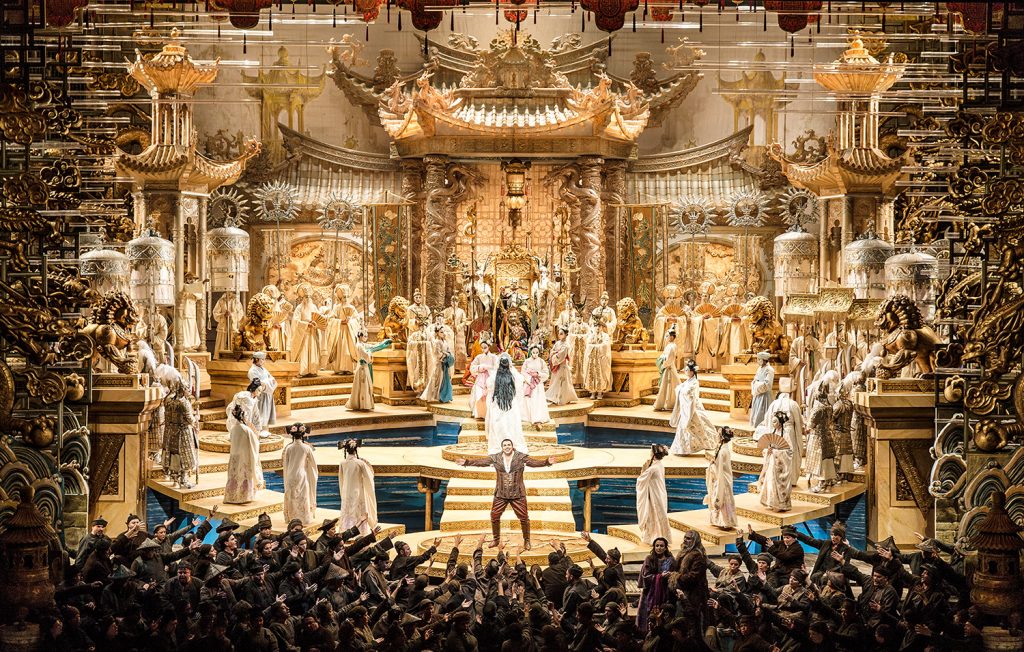 Turandot is an opera that deals with the themes of love, loss and tragedy. Given its elements of the Romantic sound-world, it is quite surprising that the opera was composed as late as in 1926. The plot is bizarre, even by operatic standards, and tells the story of the compulsory execution of any potential husbands of Princess Turandot, for failing to answer three riddles correctly.

The story is set in the mythic past of Peking. Outside of the Imperial Palace, a mandarin reads an edict to the crowd, “Any prince seeking to marry Princess Turandot must answer three riddles. If he fails, he will die”.

At moonrise, the most recent suitor, the Prince of Persia, is to be executed. Amongst the onlookers are the slave girl Liù, her aged master, and the young Calàf, who recognises the old man as his long-lost father, Timur, the vanquished King of Tartary. Only Liù has remained faithful to him, and when Calàf asks her why, she replies that a long time ago, Calàf once smiled at her.

The mob cries for blood but greets the rising moon with a sudden fearful silence. As the Prince of Persia meets his death, the crowd calls upon the princess to spare his life. Turandot appears in her palace and wordlessly orders the execution to proceed. Transfixed by the beauty of the unattainable princess, Calàf decides to win over her heart, to the horror of Liù and Timur. Three ministers, Ping, Pang, and Pong, appear and try to discourage him too, but Calàf is unmoved. He reassures Liù of his success and strikes the gong to announce a new suitor.

Ping, Pang, and Pong prepare for the eventuality of a wedding or a funeral. They discuss their misery ever since Turandot reached the marriageable age, numbering the many noble suitors who have met a deadly fate and reminiscing about life in their native provinces. Is there truly a man whose passion can melt Turandot’s icy heart? Their hopes are guarded.

A crowd assembles for the Trial of the Three Enigmas, a system Turandot devised to avenge her ancestress, Lo-u Ling, who was captured, raped, and put to death by marauding invaders. She offers Calaf one last chance to withdraw, but he stands firm.

The first question is offered, “What is born each night and dies each dawn?” and Calàf correctly answers “Hope”. Slightly taken aback, Turandot poses the next riddle, “What flares warm like a flame, yet it is no flame?” Calaf hesitates, then answers perfectly “Blood.”

Visibly shaken, Turandot asks the final question, “The ice that gives you fire, what can it be?” Calaf tarries, then triumphantly cries “Turandot!” The people celebrate his victory, but Turandot pleads with the Emperor not to be given to this Unknown Prince. Seeing her distress, Calaf offers a riddle of his own, “If, before morning, you can discover the name I bear, I shall forfeit my life”.

At night in the Imperial Gardens, Calàf hears a proclamation – “On pain of death, no one in Peking shall sleep until Turandot learns the stranger’s name”. Calàf is certain of his victory, but Ping, Pang, and Pong try to bribe him to leave the city.

As the fearful mob threatens him to learn his name, the soldiers drag Liù and Timur in. Calàf tries to convince the crowd that neither of them knows his secret. When Turandot appears, commanding Timur to speak, Liù replies that she alone knows the stranger’s identity and will never reveal it. The soldiers torture her, but she remains silent.

Impressed by her fortitude, Turandot asks what gives Liù the strength to resist. It is love, she replies. When the torture intensifies, Liù tells Turandot that she, too, will know the joys of love. Then, she snatches a dagger and kills herself.

The crowd forms a funeral procession, and Timur follows as they take her body away. Turandot remains alone to confront Calàf, who impetuously kisses her. Knowing emotion for the first time, Turandot weeps. Calàf, now sure of winning her, reveals his identity.

Before the Emperor’s throne, Turandot declares she knows the stranger’s name, “It is Love”.

WHO IS ... Giacomo Puccini?