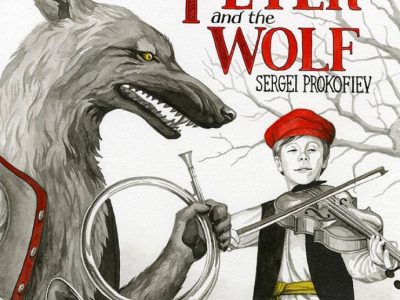 Sergei Prokofiev’s Peter and the Wolf, deemed by many as ‘the symphonic fairytale for children’, has helped to introduce young listeners to classical music, using a cast of vibrant characters, which is portrayed by different instruments in the orchestra. The children’s story is usually told by a narrator, while the orchestra illustrates it. Prokofiev took the piece to Los Angeles in 1938 to play it for Walt Disney. Disney was captivated by the characterisation of the themes, and Peter and the Wolf became an animated film.

Composing this piece for children’s theatre with the intent to introduce children to all the different instruments in the orchestra, each character in the story was portrayed by an instrument. Peter himself was represented by a lighthearted melody by the strings. The starring instruments were introduced by playing their melody before the performance.

At the Beginning, Peter (represented by strings)  is introduced, living with his grandfather (represented by bassoon) in a forest clearing. Grandfather does not want Peter to wander outside in the meadow as there were wolves outside. One day, Peter goes out the garden gate and finds a duck swimming in a nearby pond. The duck (represented by oboe) is arguing with a little bird. Peter sees a cat (represented by clarinet) approaching, and warns the bird (represented by flute) who flies up into a tall tree.

In the Middle of the story, Peter’s grandfather comes outside and scolds him for wandering out of the garden. They go back into the garden and Grandfather locks the gate. Soon, a wolf (represented by French horn) appears from the woods. The cat climbs a tree and escapes, but the duck gets swallowed by the hungry wolf. Peter gets a rope and climbs over the garden wall onto a tall tree. The bird distracts the wolf by flying over his head while Peter lowers a noose and catches the wolf by its tail.

For the Ending, hunters (represented by timpani) come out of the woods and fire at the wolf, but Peter stops them. They all bring the wolf to the zoo in a victory parade, and in the end, the duck can be heard quacking inside the wolf’s stomach.

WHO IS ... Sergei Prokofiev?