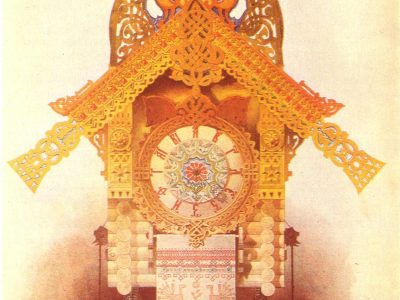 In 1874, Mussorgsky composed Pictures From An Exhibition as piano pieces based on 10 pictures by the artist, architect and designer Viktor Hartmann. Later in the summer of 1922, Maurice Ravel made his orchestral transcription for Serge Koussevitzky, who conducted the first performance in Paris in the same year. Despite working from the same Rimsky-Korsakov rendition of the piece that Tushmalov and Wood used, this orchestral version still far outstrips theirs, with brilliance in its colours and sheer ingenuity.

Promenade
This piece opens with the trumpets presenting the Promenade theme. In a few subsequent appearances, the entire orchestra then joins in for the most extended statement of the theme.

Gnomus
The music lurches, twitches and snaps grotesquely, depicting the carved wooden nutcracker as a wizened gnome breaking the shells in his jaws in the Hartmann sketch.

Promenade II
The horn initiates the theme in a gentle mood, and the wind choir follows suit.

II Vecchio Castello (The Old Castle)
The bassoons evoke a lonely scene that takes place at Hartmann’s old castle in Italy. A troubadour (English horn) sings a sad song, at first to a lute-like accompaniment in violas and cellos.

Promenade III
The trumpets and the trombones play the theme with a full orchestra.

Bydlo (Cattle)
A Polish peasant drives an oxcart. Its wheels lumber along steadily with rhythmic regularity and painfully with a heavy-laden melody in the brass.

Promenade IV
This promenade movement begins with the flutes. Then, with tranquil steps, the oboes and the bassoons take over the walking.

Ballet of the Unhatched Chicks
The ballet dancers in eggshell costumes represent the Hartmann chicks. Mussorgsky moves from oxcart to fowl yard with disarming ease.

Two Polish Jews, One Rich, the Other Poor
Samuel Goldenberg and Schmuyle were later additions to the title of this section, with no authority in Mussorgsky’s score. The composer satirizes the pair through haughty pronouncements from the patriarch (winds and strings) and nervous subservience from the beggar (stuttering trumpets).

Limoges, the Marketplace
This section depicts the bustle and the excitement of peasant women in the French city’s market in a brilliant way.

Promenade V
At the end of Catacombs, Mussorgsky wrote in his manuscript, “Con mortuis in lingua mortua” (With the Dead in A Dead Language), signalling the start of this mournful rendition of the Promenade.

The Hut on Fowl’s Legs (Baba Yaga)
Baba Yaga, a witch who lives in a hut supported by chicken legs, rides through the air demonically with Mussorgsky’s best Bald Mountain pictorialism.

The Great Gate of Kiev
The ceremonial grandeur, the priestly chanting, the clanging of bells, and the Promenade theme create a singularly majestic canvas that is as conspicuously Russian to the ear as Hartmann’s fanciful picture of the Gate is to the eye.

WHO IS ... Modest Mussorgsky?