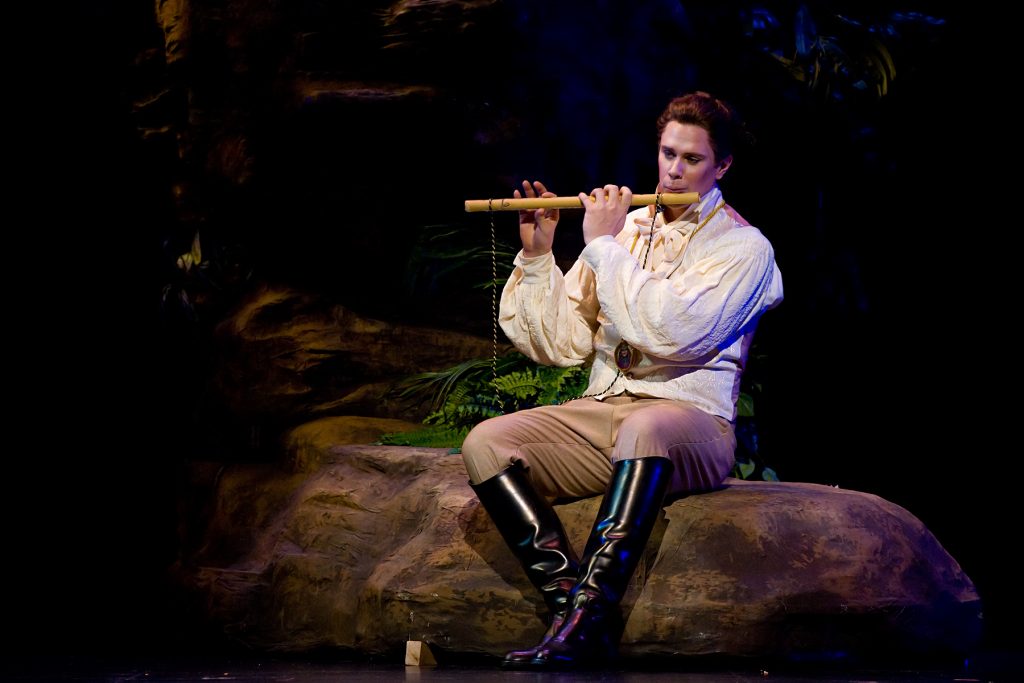 “Once upon a time, a prince awoke to find himself lost in an enchanted forest in a strange land. He had no idea how he had arrived in such a place, nor how he would ever return home. The forest was dark and full of mysterious sounds. He was alone and afraid.”

And so begins The Magic Flute.

Act 1 opens with the handsome Prince Tamino being chased by a serpent through a valley. When he falls unconscious, three ladies in the service of the Queen of the Night emerge and kill the snake. After the three ladies left to inform the Queen, the bird-catcher, Papageno, appears and brags that he had killed the snake for the prince. When the three ladies return, they catch Papageno in a lie and seal his mouth in order to teach him a lesson. The three ladies give Tamino a picture of the Queen’s daughter, Pamina, who was enslaved by an evil magician, Sarastro. He immediately falls in love with her. The Queen appears in a burst of thunder, grieving over her daughter. She charges Tamino with Pamina’s rescue, offering her hand in marriage. Tamino agrees, and the ladies give Tamino a magic flute and Papageno a set of silver bells to ensure their safety. She appoints the Three Boys to guide them.

As Monostatos (Sarastro’s slave) pursues Pamina, Papageno appears and frightens him off. Papageno then tells Pamina that Tamino, who has fallen for her, is coming to her rescue.

Tamino is led by the three spirits to Sarastro’s temple, where he learns from a priest that Sarastro is not the evil one, but the Queen is and that Pamina is safe. With his flute, Tamino charms the wild animals before rushes off towards the sound of Papageno’s pipes.

Monostatos and his men chase after Papageno and Pamina but are stunned when Papageno plays his magic bells. Sarastro appears in a grand ceremony and punishes Monostatos, and promises Pamina her eventual freedom. Pamina is enchanted by the sight of Tamino as he moves into the temple with Papageno.

Act 2 begins with Sarastro telling the priests that Tamino will undergo the rites of initiation. As Monostatos tries to kiss the sleeping Pamina, the Queen of the Night surprisingly appears before him. The Queen gives Pamina a dagger to kill off Sarastro.

Consoling the desperate Pamina, Sarastro explains that he has no intention in seeking revenge against her mother.

A priest requests Tamino and Papageno to vow their silence and abstinence from food. However, Papageno immediately breaks the vow when he accepts a glass of water from a flirtatious old lady, who vanishes into thin air when he asks for her name.

Tamino and Papageno continue the rest of their journey guided by the three spirits. Even when Pamina appears, Tamino chooses to keep his vow. Pamina is heartbroken for the cold treatment.

To complete his initiation, Tamino needs to undergo two more trials. However, Papageno gives up on the brotherhood and chooses to marry the old lady instead. When he promises his faithfulness to her, the old lady transforms into a beautiful young Papagena and vanishes. With the protection of the magic flute, Pamina and Tamino reunite and face the ordeals of water and fire together.

Papageno attempts to hang himself from the tree but is saved by the three spirits, who remind him that his magic bells will lead him to true happiness. As Papageno plays the bells, Papagena reappears before him, and they start to plan a family together. The Queen of the Night, the three ladies and Monostatos launch an attack on the temple but are eventually defeated and banished. Sarastro blesses the couple at the entrance of the main temple, and a chorus starts singing praises of Tamino and Pamina for overcoming the challenges in finding true love.

*Listen to the theme of each character. You can often tell that someone will appear before they reach the stage. For instance, the Queen of the Night’s music is fast, agile and with high notes while the priest Sarastro’s theme is low, deep and slow.