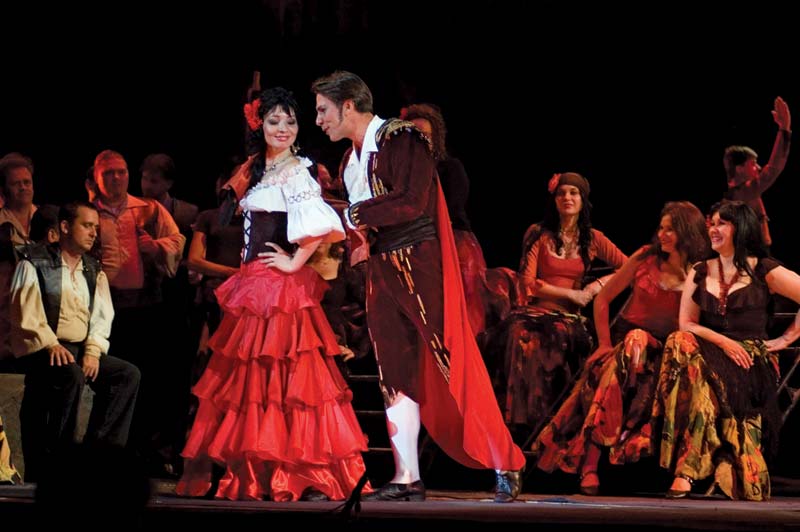 Carmen is an opera by Georges Bizet based on an 1845 novella by French dramatist Prosper Mérimée. The title character, a wild Spanish gypsy, is unscrupulous in matters of the law and of the heart.

A Town Square in Seville, Spain

Moralès and his soldiers are passing their time reading and playing dice when Micaëla appears to look for her fiancé, Corporal Don José. She is told that José will arrive with the changing of the guard. Micaëla then departs.

Lieutenant Zuniga and Don José arrive for the changing of the guard. The midday bell rings, and the women who have been working in the factory step outside for a break. Among them is Carmen, who entrances all, except Don José. Carmen throws a flower at him and returns to the factory.

Micaëla returns with a letter from Don José’s mother. Suddenly, the women in the factory burst loudly into the square, accusing Carmen of wounding a co-worker with a knife. José is ordered to arrest Carmen, but once they are alone, he was convinced by Carmen to help her escape. Don José unties Carmen and lets her go. José is arrested.

At the end of a dance, Zuniga tells Carmen that José has been released after a month in prison. The famous bullfighter Escamillo arrives, and when he sees Carmen, he is immediately attracted to her, but she refuses his advances. The smugglers Remendado and Dancaïro enter. They ask Carmen, Frasquita, and Mercédès for their help on a smuggling mission. Carmen refuses, saying again that she is waiting for Don José, her true love.

Don José arrives, and Carmen dances for him. When Don José tells Carmen that he must return to the barracks, she mocks him and accuses him of not loving her because if he did, he would leave the army and join her in the mountains instead. Don José tells her that he loves her but that he must go.

Suddenly, Zuniga bursts in and the two men have a brawl. Zuniga and Don José are restrained, but now that Don José has attacked his superior officer, he has no choice but to leave the army and join the smugglers.

The smugglers are on their way to the border with their stolen goods. Carmen and Don José argue, and Carmen joins the women, who are using cards to tell their fortunes. For Carmen, the cards foresee only death.

Don José is left behind to guard stolen goods at the camp. Micaëla enters searching for Don José, but she hides when Don José fires his gun at an intruder, who is actually Escamillo. When Don José knows that he is searching for Carmen, he becomes furious, and they fight. They are interrupted by Carmen and the other smugglers. Escamillo departs, inviting everyone — especially Carmen — to his next bullfight in Seville. Micaëla is discovered and reveals that Don José’s mother is dying. She begs him to return home. Carmen urges him to go. Don José decides to leave, but he warns Carmen that they will meet again.

Outside the Bullring in Seville

Carmen escorts Escamillo as the excited crowd cheers for the bullfighters. Frasquita and Mercédès warn Carmen that they have seen Don José in the crowd. Don José finds Carmen alone and pleads with her to forget the past and start a new life with him. Carmen tells Don José that their relationship is over. Don José tries to prevent Carmen from joining her new lover, causing her to lose her temper. She angrily throws away a ring that Don José had given her. Enraged, Don José stabs Carmen as the crowd cheers for Escamillo’s victory.