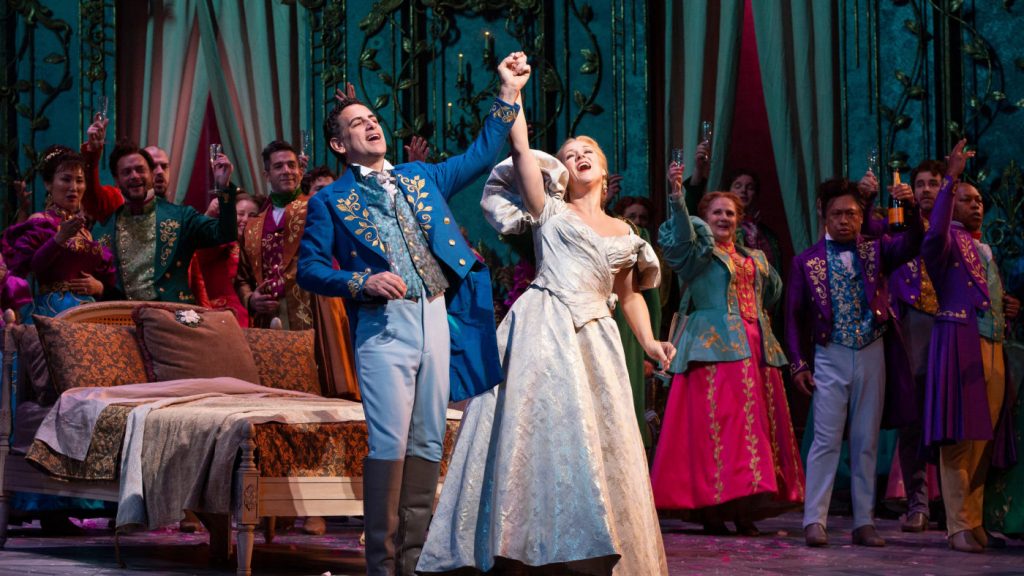 La Traviata is an opera that deals with themes of love, illness and sacrifice. It survived a notoriously unsuccessful opening night to become one of the most celebrated operas in today’s repertoire. Here lies some of Verdi’s most profound and heartfelt music through the voice of Violetta, the title role of the “fallen woman”.

Violetta Valéry, a famed courtesan in Paris, throws a lavish party at her Paris Salon to celebrate her recent recovery from a protracted illness. When Violetta is introduced to Alfredo Germont, she is surprised to learn that he had visited her house daily during her recuperation. Prompted by Violetta, Alfredo leads the assembled crowd in a drinking song. Violetta invites her guests into the ballroom but begins to feel dizzy and falls behind. Alfredo stays behind and inquires after her health, and then declares his love for her. Although she rejects him at first, she finds there is something about Alfredo that touches her heart. Violetta hands him a camellia and tells him to return it to her when it has withered. Alfredo, overjoyed, departs. After he leaves, Violetta wonders if Alfredo could be the one in her life. Upon hearing him singing of the passion he feels for her outside her window, she concludes that it is madness and she needs freedom to live her life.

Alfredo and Violetta have been living together outside Paris for three months. Alfredo learns from Annina, Violetta’s maid, that Violetta has been selling her property in Paris to cover the household expenses. Upset and ashamed that his beloved has been secretly supporting him, he leaves immediately for Paris to settle the matters himself. While he is away, Violetta receives an unexpected visit from Giorgio Germont, Alfredo’s father, who disapproves of her reputation and her relationship with his son. Out of love for Alfredo, she relents to his father’s demand and agrees to the sacrifice by leaving Alfredo to protect their family name and allow Alfredo’s sister to marry well. Upon Violetta’s departure and apparent betrayal, the furious Alfredo swears vengeance despite all the memories of home and family.

At Flora’s ball, news has spread of Violetta and Alfredo’s separation. Violetta and her lover, Baron Douphol, have arrived. Alfredo wins a fortune when competing with the baron at the gaming table. When everybody has withdrawn, Alfredo confronts Violetta, who claims to be truly in love with the baron. The raging Alfredo calls the guests as witnesses and publicly humiliates and denounces Violetta, throwing his winnings at her as payment for their time together. Upon witnessing the scene, Giorgio Germont rebukes his son for his behaviour, while the baron challenges Alfredo to a duel.

Months later, Dr. Grenvil tells Annina that Violetta will not live long since her tuberculosis has worsened. Violetta reads a letter from Alfredo’s father, informing her that he has revealed the truth of her sacrifice made for Alfredo and his sister, and he is sending his son at once to ask for forgiveness. When Alfredo arrives, and the lovers are reunited, Alfredo suggests that they leave Paris, but she knows her time is up. Alfredo’s father enters with the doctor, regretting what he has done. After singing a duet with Alfredo, Violetta suddenly regains strength but dies in Alfredo’s arms a moment later.