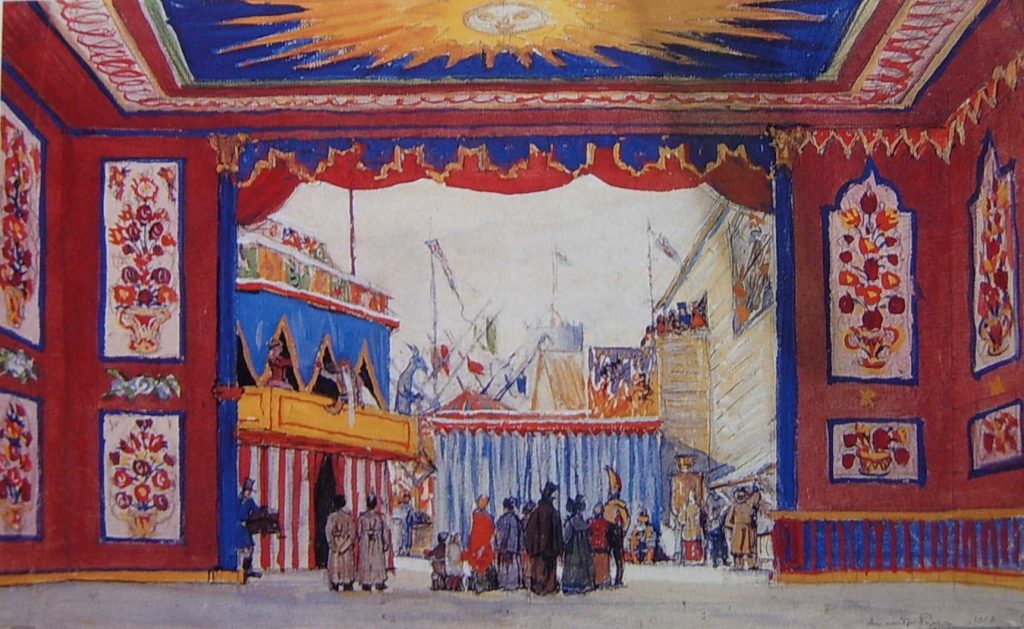 With the success of Igor Stravinsky’s Firebird in 1910, the composer shot to fame and became an instant household name. Hearing this, the impresario (organiser) of the Ballet Russes, Serge Diaghilev, lost no time in commissioning a second work from Stravinsky. The composer was working on a piano concerto at the time, but after hearing it, Diaghilev immediately realised its potential as a theatrical piece, and the rest was history.

When composing Petrushka, Stravinsky had a clear image in mind. He saw “the picture of a puppet, suddenly endowed with life”. This puppet would be called Petrushka, the immortal yet unhappy hero.

The first of the four scenes opens with the hectic bustle of the carnival Shrovetide Fair. A flute summons passersby to the colourful street party. Street performers vie for the crowd’s attention (flutes and clarinets, accompanied by the triangle). A drum brings attention to the Magician, who introduces his three puppets – Petrushka (a pathetic clown), the Ballerina, and the Moor. Touching them with his flute, he brings them to life, and they start performing a Russian dance much to the amazement of the audience.

The second scene is set in Petrushka’s dark, crampy room and introduces the famous “Petrushka chord” (first portrayed by clarinets in a combination of two dissonant keys, and the sound is like the blaring horn of a car). After the show, the Magician kicks Petrushka into the room. Petrushka sobs (portrayed by bassoon) and rages (an orchestra led by a piercing trumpet). The Ballerina joins him (woodwind and piano duet), and the ugly clown professes his love for her. Disgusted, the Ballerina flees the scene. In his despair, Petrushka kicks a hole in the wall.

In the third scene, with the blaring low brasses and grumbling piano arpeggios, we find the splendid brute Moor in his room. He attracts the attention of the Ballerina, and the two dance an odd, uneven Viennese waltz (cornet, flutes, and harps). However, they are interrupted by Petrushka (muted trombone), who the Moor quickly shoves out.

The final scene brings us back to the fair. Two nursemaids dance to a cheerful folk song (oboe, followed by horn and flutes) and a peasant (clarinet) leads a chained bear (tuba) into the crowd. The frenzy increases as a group of masqueraders enter. Petrushka cries out suddenly, having been struck by the Moor and his sabre. Flute and piccolo sound Petrushka’s whimpers as a policeman summons the Magician, who picks up Petrushka and shakes it at the crowd to prove he is only a puppet. The crowd disperses, but Petrushka’s defiant voice (trumpets) rises again. The ghost of Petrushka appears on stage, thumbing his nose at the Magician, who then flees in terror.