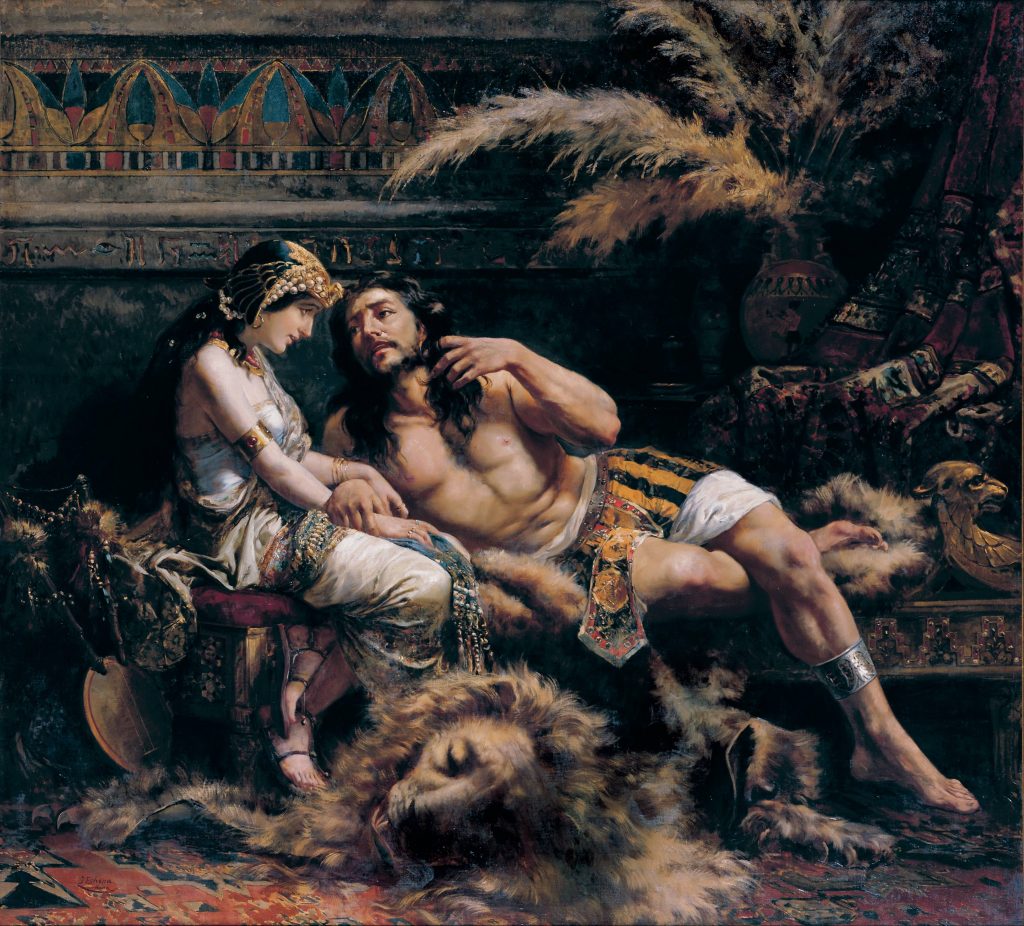 Based on the Biblical tale of Samson and Delilah, this opera is a grand opera written by Camille Saint-Saëns to a French libretto by Ferdinand Lemaire. It contains three acts and four scenes, with its second act being one of the set pieces that defined French opera. It is Saint-Saëns only opera that is regularly performed.

Act 1, A Square In Gaza At Night

The enslaved Israelites are praying outside the temple of Dagon. Jehovah feels angry for his destroyed city and people. Samson emerges from the crowd and calls on them to bless in the name of God as it is time to break themselves free.

When Abimélech, Satrap of Gaza, and his Philistine guard arrive to collect the tribute, he ridicules Samson and his people for placing their trust in a powerless god incomparable to the great Philistine god Dagon.

Samson, inspired by a vision of angels, incites his people to revolt against the Philistines. He kills Abimélech. The High Priest of Dagon orders for the suppression of the revolt. A messenger describes how Samson leads the Israelites to their deliverance. The high priest curses the Israelites and retreats to the mountains with the warriors.

At dawn, the Israelite elders give thanks for their deliverance and bless Samson. Dalila and a group of Philistine maidens enter with flowers. Dalila wishes to revive a stale love, urging Samson to seek her at her home, the Valley of Sorek.

Act 2, Delilah’s Retreat In The Valley Of Sorek

Dalila feels queasy as she awaits for Samson at her home. She calls on the power of love. The high priest arrives and offers Dalila a handsome reward for Samson’s capture, reminding her of Samson’s success in the revolt and of his legendary strength that can only be unarmed with her love. She rejects the offer scornfully. What she is after is taking revenge for Samson’s rejection and will make Samson fall into her trap. The high priest promises to return with reinforcements, reminding her that the fate of the Philistine people is now in her hands.

Samson, racked with remorse and indecision, finally arrives. Dalila pleads for his love, but Samson tells her that he has sworn to God to break ties with her for his people. Dalila says she worships a more powerful god, Love, and recalls their sweet memories. Samson gives in to her and reaffirms that he still loves her.

A storm is drawing near. Dalila changes her strategy, saying that she is jealous of Samson’s devotion to Jehovah. She insists Samson reveal his secret strength to prove his love for her. As the storm breaks, Samson hears the warning voice of God and prays for strength. Dalila accuses him of being a coward, and Samson gives in to her. As the Philistine soldiers arrive, Dalila calls for them. Samson cries out for the betrayal.

The blinded Samson is in the dungeon. He hears voices accusing him of betraying them for a woman. He feels remorse and prays to God to spare his people and punish him alone instead. At dawn, the Philistines prepare for their orgiastic worship of Dagon as a child guides Samson to the temple.

The high priest ridicules Samson while Dalila reminds him of their passionate night. The high priest challenges Jehovah to restore Samson’s sight, mocking at their weakness. Samson is furious. Samson is ordered to join the sacrifice.

Samson asks the child to lead him to the temple pillar. He prays for strength to avenge his God and himself. His power is restored, and the temple crashes down.