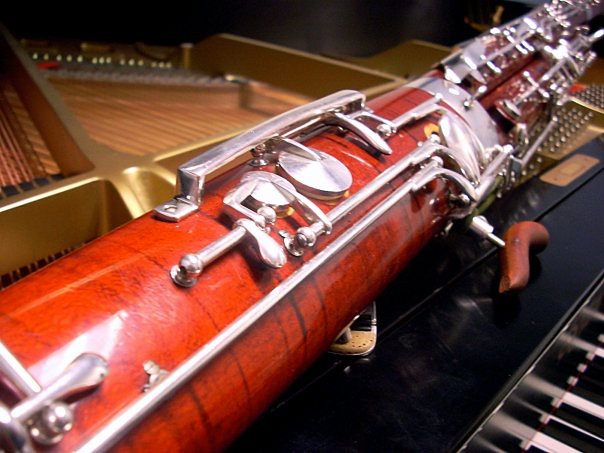 This harmoniemusik, which was specially composed for a public concert given by Anton Stadler in 1784, is famous for its perfect harmony and soft melodic line. It is a piece with texture, which is attributed to the use of unique combinations of instruments of the era, scoring, rhythm and articulation. In addition to the usual harmonie ensemble of two oboes, two clarinets, two horns, and two bassoons, Mozart adds two more horns, a pair of basset horns, and a string bass.

The Basset Horn is a curious member of the clarinet family. Traditionally, it is a small bore (roughly equal to the bore size of the B-flat and A Clarinets) instrument pitched in F (a fifth lower than written). Again, traditionally, the Basset Horn was to be played by B-flat/A Clarinetists with the same mouthpiece used on those instruments. However, in practicality, most modern instruments do not conform to this ideal. The bore has been enlarged, and in some cases is the exact same as to be found in the Alto Clarinet, so that in reality, the Basset Horn is now simply and Alto Clarinet in F.

The first movement begins with a slow introduction and leads into the Allegro Moderato section, which is in monothematic sonata form. The first theme is played by the clarinets, later taken over by the basset horns and the oboes in a modified form as the second theme.

The fourth movement has two trio sections, just like the second movement. The first trio, by contrast, has fewer staccato notes and is in the parallel minor, B-flat minor. After the minuet section is repeated, the second trio is played in F major.

The fifth movement returns to the slow tempo, beginning and ending with an Adagio section in the tonic and the triple meter, and with many long notes in the melody. Between the beginning and the ending, a Allegretto section showcases a contrast with a constant pulse in the bassoons.

The sixth movement is a set of six variations in andante theme, primarily presented by the solo clarinet. The variations make use of various rhythmic motives and often feature solo instruments.

The final movement is a rondo with many tutti passages where the oboes and the clarinets play in unison. The episodes between the returns of the theme feature a greater degree of interplay amongst its instruments.