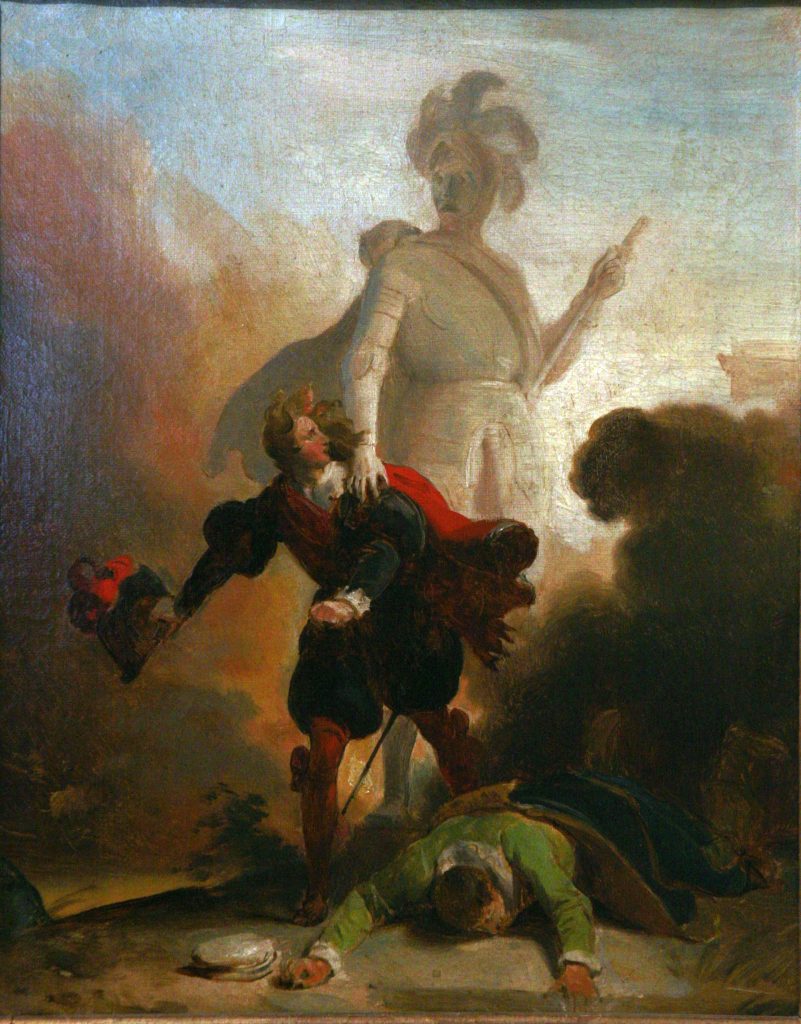 This outrageous comedy is based on the story of Don Juan, a tale of an incorrigible young playboy who sets the path to his own destruction in a single day. Don Giovanni (Don Juan) is an irresistible youth loved by women as much as he loves them. However, Don Giovanni cannot escape the consequences of flouting conventional morality.

Scene 2 (A public square outside Don Giovanni’s palace)
Don Giovanni makes advances to a lady before recognising her as a past conquest, Donna Elvira. She has followed him to entreat him to return to her. Leporello is left to enlighten her on his master’s way of life.

Scene 3 (The open country)
Zerlina and Masetto are to get married. At his expense, Don Giovanni invites everyone to a banquet, whereby Leporello needs to keep Masetto occupied while Don Giovanni seduces Zerlina. She is about to succumb to his advances when Donna Elvira interrupts them and tears Zerlina away. Donna Anna and her fiancé, Ottavio, ask Don Giovanni to find the murderer of her father, but Donna Elvira returns and warns them not to trust Don Giovanni. Donna Anna recognises his voice and realises that it was Don Giovanni who killed her father.

Scene 4 (A garden outside Don Giovanni’s palace)
Leporello tells his master how he has provided entertainment for the villagers. Zerlina tries to convince Masetto that Don Giovanni has not touched her. Wearing masks, Donna Anna, Donna Elvira and Don Ottavio enter, and Don Giovanni bids Leporello to invite them to the party.

Scene 5 (Don Giovanni’s ballroom)
Don Giovanni greets the three masked guests as they enter the ballroom. During the dance, Don Giovanni leads Zerlina to an adjacent room. She screams for help, and the masked figures reveal themselves and surround Don Giovanni. He sheathes his sword and escapes unhurt.

Scene 1 (Outside Donna Elvira’s house)
Leporello has had enough of the life he is leading, but Don Giovanni manages to pacify and persuade him to exchange clothes for another amorous adventure. Don Giovanni serenades. When Donna Elvira comes down from her balcony, Leporello leads her away. Just as Don Giovanni is serenading the maid, Masetto and other peasants appear, and Leporello tells them where to find his master. Don Giovanni is then left alone with Masetto, whom he disarms and thrashes. Zerlina, who is not far away, hurries in to console Masetto.

Scene 2 (A dark courtyard)
Leporello has had enough of Donna Elvira’s affection and is looking for a way out. Zerlina and Masetto arrive in search of Don Giovanni. They believe that they have found the culprit. Donna Elvira defends her beloved, but Leporello sheds his disguise, pleas for mercy and escapes.

Scene 3 (A graveyard with the statue of the Commendatore)
Don Giovanni climbs over the cemetery wall to escape from his pursuers. He laughs as he relates his adventures to Leporello. A sinister voice is heard from the Commendatore’s statue. Don Giovanni forces Leporello to invite the statue to dinner, and it nods in acceptance.

Scene 4 (Donna Anna’s room)
Donna Anna assures Don Ottavio that she loves him, but asks him to wait a little longer for marriage.

Scene 5 (Don Giovanni’s chambers)
Don Giovanni is enjoying his supper when Donna Elvira enters and begs him to repent. He ridicules her. As she is leaving, she shrieks, seeing the marble statue of the Commendatore seeking admittance. Leporello refuses to open the door, and Don Giovanni opens it himself, dropping the lamp as he does so. The scene plunges into darkness, except for a ghostly light around the statue. Don Giovanni shows no fear and welcomes his guest who calls for him to repent. He refuses as he is devoured by flames. In the epilogue, Donna Anna, Donna Elvira, Zerlina, Don Ottavio and Masetto enter to seek revenge on Don Giovanni. Leporello informs them of his master’s terrible punishment, and the opera ends with a muted jubilation.