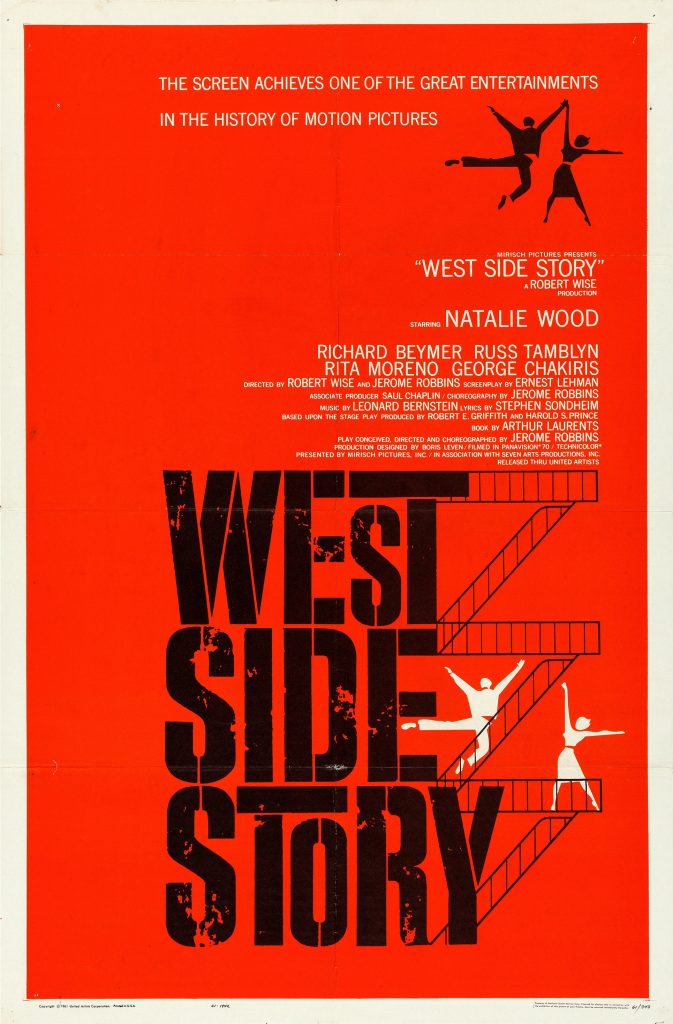 West Side Story is a musical inspired by Shakespeare’s play Romeo and Juliet. The musical has a book by Arthur Laurents, music by Leonard Bernstein and lyrics by Stephen Sondheim. It remains as one of the American musical theatre’s most revolutionary and most loved treasures.

On the Upper West Side of New York City, two rival teenage gangs, the Jets and the Sharks, are fighting for the dominance of their neighbourhood. The police officers, Krupke and Lt. Schrank, warn them and chase the Sharks off. To ensure their continued control of the street, the Jets’ leader, Riff, suggests challenging the Sharks’ leader, Bernardo.

Riff finds Tony, his best friend and former member of the Jets, and convinces him to relay a message to the Sharks. Some of the Jets doubt Tony’s loyalty, but Riff trusts him. Tony, who initially refuses, is convinced that something big is about to happen. Bernardo’s girlfriend, Anita, makes Maria (his sister) a dress for the dance. Maria, who has recently arrived from Puerto Rico, has an arranged marriage with his brother’s friend, Chino, whom she does not love.

The dance begins. Soon, a challenge dance, Dance at the Gym, is called out. Tony and Maria’s eyes meet, and they fall in love. They are lost in their dance when Bernardo pulls Maria away and sends her home. Tony reaches Maria’s home and serenades her. They confess their love for each other.

Riff and Bernardo agree to meet at the neutral ground, Doc’s Drugstore. At Doc’s Drugstore, Riff cools off the Jets’ antsy as they wait for the Sharks. The Sharks arrive to call for a rumble. The leaders agree to Tony’s suggestion of a fair fight despite protest from their members. Meanwhile, in a monologue, Lt. Schrank tries to find the location of the rumble. Tony shares with Doc about his love for Maria. Despite Doc’s worries, Tony is confident that things will go smooth between them.

The next day, Maria anticipates her next meeting with Tony but falls into dismay when she hears about the upcoming rumble. Maria convinces Tony to stop the fight, and they dream about their wedding. Tony arrives just in time to try to stop the fight. He keeps his composure despite being ridiculed and provoked by Bernardo. Bernardo pushes Tony, Riff punches Bernardo for Tony, and the two gangs start fighting. As Tony tries to intervene, he inadvertently causes Riff to be stabbed by Bernardo. Angered by what happened, Tony kills Bernardo, provoking a fight for death.

Everyone scatters as the police approach. Tony is shocked and immobilized by what he had done. At the last moment, the tomboy Anybodys, tells Tony to flee with the knives. They leave the bodies of Riff and Bernado behind.

Maria happily dances on the roof, unaware of the fight. When Chino brings the news of Bernardo’s murder, Maria runs to her bedroom and prays that Chino is lying. Maria vents her anger on Tony when he arrives. But she decides to run away with him because she still loves him. Maria’s bedroom disappears, and they fall into a peaceful dreamlike world.

A-Rab and Baby John from the Jets manage to escape from Officer Krupke and meet the rest of the gang. Anybodys brings the news that Chino is hunting for Tony with a gun. Action, who has taken over as the head, accepts Anybodys into the gang. They split up to find Tony. As Tony leaves, he tells Maria to meet him at Doc’s so they can run away to the country together.

Anita arrives at Maria’s home and launches an angry tirade against Tony. As Maria relates to Anita about the power of love, Anita realizes that both of them love their men in a similar way. She admits that Chino is hunting for Tony with a gun. When Lt. Schrank arrives to question Maria about her brother’s death, Anita agrees to go to Doc’s to ask Tony to wait for Maria.

Anita comes across the Jets, who have found Tony, at the Doc’s. They humiliate Anita with insults and attempt rape. Doc arrives in time to stop them. The furious Anita spitefully tells the Jets that Chino has shot Maria dead. Doc relates the news to Tony, who leaves to beg Chino to shoot him as well because he has nothing to live for anymore. Tony sees that Maria is still alive as Chino arrives and shoots him. He dies in Maria’s arms.

Angered, the Jets move in towards the Sharks as Maria picks up Chino’s gun. To Maria, their hatred has caused the death of Tony. Although she wants to kill them all, she is unable to bring herself to fire the shot. She drops the gun and cries in grief. Gradually, the members of both gangs stand on either side of Tony’s body, marking the end of their feud. They form a procession, and together, they carry Tony away.