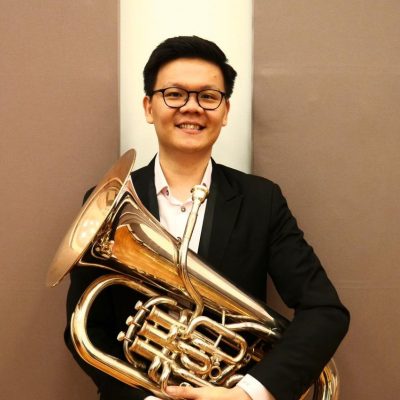 Vincent Tan holds a Bachelor of Music (Honours) from the Royal Northern College of Music and a Diploma in Music Performance from the Nanyang Academy of Fine Arts. His primary teachers are Steven Mead, Fredi Sonderegger and Dr. David Thornton.

Vincent is a founding member of The Brass Compass, which had won the first prize in the Chamber Music Category at the International Tuba and Euphonium Conference (2016) held in Knoxville, Tennessee. After winning the Philip Jones Brass Ensemble competition held at the Royal Northern College of Music in 2016, he represented the Royal Northern College of Music at the Philip Jones Tribute Concert held at the St. John’s Smith Square in London.

His interest in innovative and non-conventional performance presentation has led him to become one of the founding members of K口U, a mixed-instrumental ensemble that focuses on creating unique and immersive concert experiences.

Vincent is currently based in Singapore and holds the Principal Euphonium position in Orchestra Collective and The Philharmonic Winds.

Vincent is a Sterling Musical Instruments performing artist and plays exclusively on the Sterling Virtuoso Euphonium.