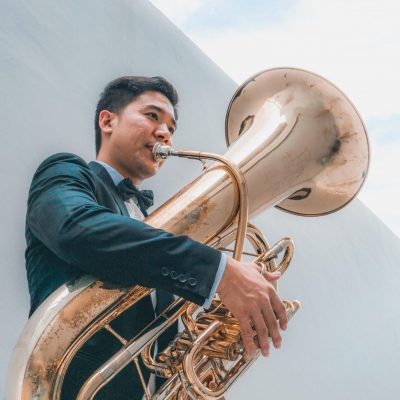 Tan Yao Cong’s multi-faceted musical career as a performer, an educator and an orchestra manager has taken him all over the world and across different dimensions of the music industry.

He studied under the tutelage of Patrick Harrild (then Principal Tuba of London Symphony Orchestra), graduating with a Bachelor of Music (Honours) in Tuba performance from the Guildhall School of Music & Drama. During his years in London, he honed his skills in tuba performance through international engagements, which include the London Symphony Orchestra Brass Academy and Alzira Spanish Brass Festival.

In Asia, Yao Cong has toured with the International Youth Wind Orchestra and Asian Youth Orchestra, while appearing regularly with The Orchestra of the Music Makers and Singapore Lyric Opera Orchestra.

Yao Cong attributes his educational and career privilege to Singapore’s Loke Cheng-Kim Foundation scholarship. He now calls Singapore his home and holds a particular passion in elevating the local music community. He sits on the faculty of Nanyang Academy of Fine Arts (NAFA) and School of the Arts Singapore (SOTA). On the side, he conducts masterclasses and music camps with Singapore National Youth Orchestra and Singapore Armed Forces Central Band.

On disc, Yao Cong can be heard as part of the Cosmopolitan Brass in a CD titled ‘John Gardner – Music for Brass and Organ’ which features Paul Archibald and Stephen King and released by Toccata Classics. He was also involved in the Guildhall Brass Ensemble’s CD recording of ‘La Fanfare Wagnerienne – The Extraordinary Lost Collection of Paul Gilson’ in 2013.