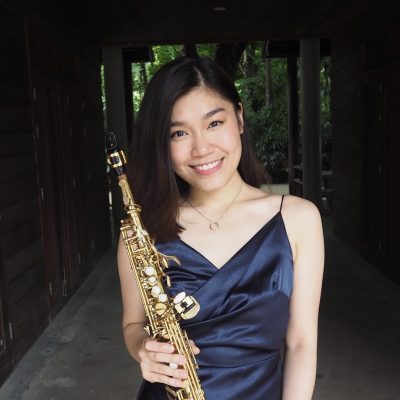 Scarlet Gouk Yan Tong is one of the most prominent saxophonists in Malaysia and currently pursuing her Master Degree in Saxophone Performance with Graduate Assistantship under the tutelage of Chien-Kwan Lin at Eastman School of Music. She has won the 1st Prize in the 1st Asia Pacific Saxophone Competition 2017 in Thailand.

Scarlet graduated with a Diploma in Music Performance and a Best Student Award 2014 from Malaysian Institute of Art (MIA). In 2019, she received scholarship awards and a First Class Honour in Bachelor Degree of Music Performance from College of Music, Mahidol University, studying under Shyen Lee. Scarlet has also studied with renowned saxophonists, including Jean-Marie Londeix, William Street, Rodrigo Vila, Kenneth Tse, and Lars Mlekusch.

Scarlet is active in performing and in leading the young saxophonists in the Asia region. She has conducted workshops at MIA (2016) and Kuala Lumpur Performing Art Centre (KLPAC) (2018), which was hosted by the Birdian Saxophone Quartet. She has also collaborated with Rodrigo Vila and David Brutti to perform at the Mallorca Saxophone Festival 2019. She joined the Bun-Leng project by Wisuwat Pruksavanich and Guillermo Presa by giving workshops and concerts.

Scarlet is also active in the Eastman Saxophone Project and Eastman Wind Ensemble. The ensemble has performed at Severance Hall, Cleveland, in 2019. As a representative of Young Saxophone Artists in the Asia Region, Scarlet represents Malaysia at the Dawn of Asia Saxophone Ensemble led by Yo Matsushita and Charles Ng. The members of the ensemble hail from China, Macau, Hong Kong, South Korea, Thailand, Taiwan and Singapore.