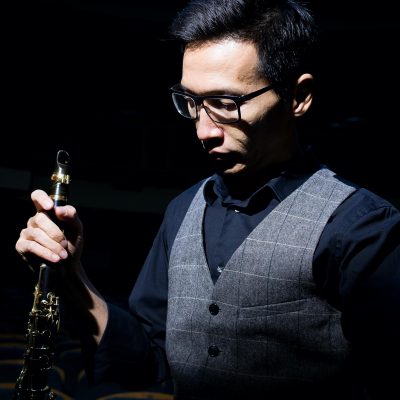 Lawrence is currently the assistant principal clarinet of the National Symphony Orchestra, Malaysia.

He was a member of Kuala Lumpur City Hall Orchestra from 1995 to 1997, where he played Mozart clarinet concerto and Weber concertino as his solo debut. In 1996, Lawrence was invited to join Kuala Lumpur Symphony Orchestra as its principal clarinet, and PJ Youth Symphonic Band as its concertmaster, where he participated in the International Musicale in Shizuoka, Japan, in 2003.

In 1998, he was selected to play in the Commonwealth Youth Orchestra and in the same year, performed with the Orchestra Internazionale D’Italia conducted by the former assistant conductor of the London Symphony Orchestra, maestro Paul Mann. In his continuous learning journey, he has had regular lessons from Marcel Luxen, the former co-principal clarinet of Malaysian Philharmonic Orchestra, under its teaching programme in 1999.

Since 2011, Lawrence has been a clarinet player of the High Winds Ensemble under the education department of MPO. He is also a core member of Ensemble Virama (since 2015) and the concertmaster of the Philharmonic Winds Malaysia (since 2016). He played with Malaysian Philharmonic Orchestra under the baton of its resident conductor, Ciaran McAuley, in the 2014 Season Opening concert. In 2019, he played for The Phantom Of The Opera world tour 2019 in Istana Budaya, Kuala Lumpur.