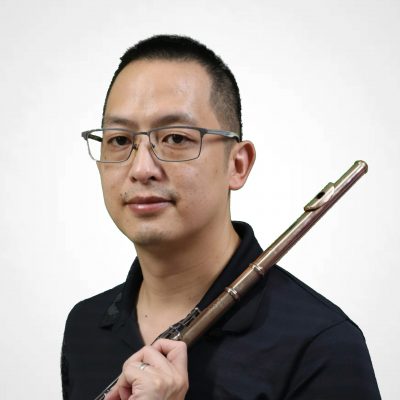 Kenneth Chia is a professional flute artist and lecturer born in New York City and currently resides in Kota Kinabalu. He is the founder of Tuning Fork Music, which was established in 2018 with the goal to provide professional classical woodwind instruction to the residents of Kota Kinabalu and beyond.

Kenneth holds a Bachelor of Fine Arts with University Honours in Flute Performance from Carnegie Mellon University (Class of 1997), studying under Julius Baker and Thomas Robertello, and a Master of Music degree in Flute Performance with a cognate concentration on Conducting from Indiana University – Bloomington (Class of 2000), studying under Thomas Robertello. He had also taken private studies with Laurel-Ann Maurer, Alberto Almarza and Jeanne Baxstresser while he was in New York and Pennsylvania.

Kenneth is an alumni of the Children’s Orchestra Society of New York, having developed his orchestral performance skills under the baton of Michael Dadap from a young age. He was later appointed as a performing teacher at the society and an assistant conductor from 1999 to 2007. He performed regularly as a freelance musician at various prestigious halls, including Carnegie Hall and Alice Tully Hall. He has performed with the Manhattan Symphonie and at the North Shore Music Festival.

Since moving to Kota Kinabalu from New York City in 2014, Kenneth has been relishing in his new home, where he teaches and performs flute with various groups and schools in Kota Kinabalu, including Universiti Malaysia Sabah, Sabah Institute of Arts, Jesselton International School, and Jesselton Philharmonic Orchestra.

When not performing music, Kenneth lives a quiet life with his lovely wife Daphne Wong, his baby daughter Lauren, and his two cats Arya and Nermal. His dream is to establish Kota Kinabalu as the prime destination for classical music pedagogy, festivals and performances one day.