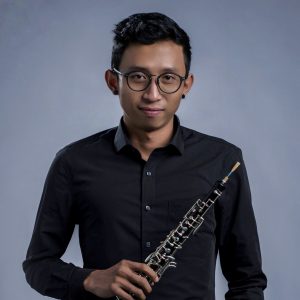 Bagaskoro Sumirat studied the oboe for the first time in 2004 at Sekolah Menengah Musik Yogyakarta, Indonesia. In 2007, he pursued Bachelor of Art at Institut Seni Indonesia Yogyakarta. He received a full scholarship to study at Yong Siew Toh Conservatory of Music in Singapore from 2013 to 2017, under the guidance of Rachel Walker and Carolyn Hollier, and graduated with a Bachelor of Music with Honours in Oboe Performance.

To learn more about music and the oboe, Bagas joined many music festivals and academies around the world, such as The Modern Academy in Hong Kong (2015), Obomania Academy in France (2016), Double Reed Day in Singapore (2016) and GLOMUS in Brazil (2017). In 2016, he received the opportunities to perform with Asian Youth Orchestra at its Asia Tour (Hong Kong, Mainland China, Singapore, Vietnam, Taiwan and Japan) and in 2017, at its World Tour (Hong Kong, Mainland China, Taiwan, Japan, America, Italy, France, Spain, Switzerland, Germany, Czech Republic and Belgium).

In 2016, he released his first solo album “Neo Indonesian Music for Oboe”, which has garnered good sales.

BCurrently, Bagas is the principal oboist of the Sun Symphony Orchestra, Vietnam.